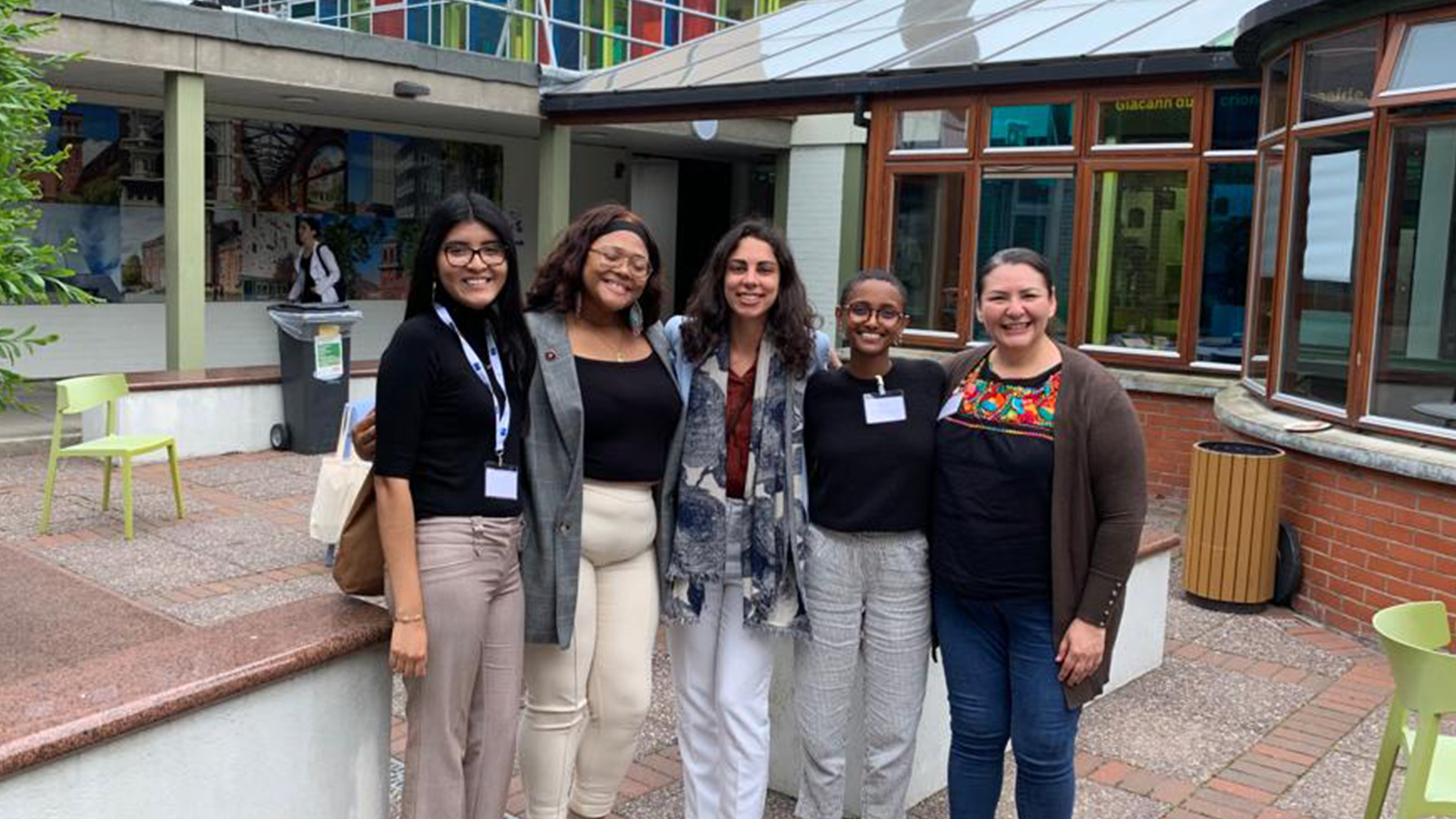 Reflections from a CLP Student: A Democratic and Sustainable plan for Social Justice Should Start Sooner

A civically engaged citizen, is valued by the systems that benefit from our participation. A civically engaged citizen feels valued and our seat at the table is automatic. It’s not an after-thought, not left for next time or to chance. When institutions of power invest in every individual, we all benefit from the depth of knowledge and experience brought to the conversation. The complex process of engaging all the players to solve the issues of Democracy, Sustainability and Social Justice in Higher Education will also be a long one. This year’s Global Forum was a baby step.

Although, this time, I didn’t quite have a seat at the main table – I felt seen and heard in other ways. I was invited to the forum by my teacher at De Anza College, Cynthia Kaufmann. On May 3rd, she sent me an informal email asking if I’d be willing to attend. I understand that Brian Murphy, President Emeritus of De Anza College and a board member of the Community Learning Partnership, made this trip possible. I am grateful to Brian for giving me and others this opportunity. Before accepting, I had to think about it a bit. As a non-traditional student in my 40s, I have a family with three small children to think about too. These personal circumstances are my burden, and they are also the reason for my strong desire to participate. I’m looking out for my own children, and everyone else’s.

I still hesitated to say yes but when I remembered that May 3rd was my birthday, I couldn’t deny the synchronicity and informed my partner and teacher that I wanted to go. That meant planning for one week without my constant presence at home. My partner also works and after the babysitter was confirmed, after the groceries were stocked and the day of my flight approached, I became excited about my trip to Ireland. A country I’d long wanted to visit. Though had neither the money, nor possibility of seeing if it hadn’t been for the Community Learning Partnership (CLP), Vasconcellos Institute for Democracy in Action (VIDA) and California Youth Leadership Corps (CYLC) programs at school. Having the time, money, and contacts to be able to volunteer is clearly also a privilege. Me and Genet Areda, another student from the US, were travel buddies and represented “all students” of America. An overwhelming and shocking thought to my system.

As a non-traditional student and affected member of the community, I saw this forum as not only a gift from the universe but an opportunity as well. A chance for me to learn as well as use my voice to effect, as best I could, the conscience of the leaders who could make future policies. On the first day, we heard three panels of speakers from different universities as well as political leaders. Afterward, for one hour of breakout rooms, I had the chance to sit with a Chancellor, a President, Minister of Education, a Council member, the head of a non-profit as well as other heads of institutions of higher learning.

The organizers of the event wanted our input as to the questions posed to each panel in the main auditorium earlier in the day. I felt like the little guppy in a much bigger ocean. But the folks in the room were curious and open to my contributions. I felt a little breathless but comfortable as I recounted my non-linear voyage toward the table that day and how I’d been brought as an original dreamer in 1983 from Mexico to the US to live in one of the two Americas. I had about ten minutes to give testimony to my experience and contribute my perspective, which I did to the best of my ability.

We didn’t have time to go into everyone’s personal history, and barely enough time to have a deeper conversation about how to start solving the problem of the breakdown of our worldwide democratic systems. But I made a point to say that the planning needs to start much earlier than at the University level. Infusing a culture and curriculum of democracy and social justice should begin at preschool. If we wait, by the time we start trying to change hearts and minds at college age, too many more folks have already been lost  along the way.

The current culture of tyranny and oppression has done a better job of entrapping people into fascist ideations early on. And we, the people fighting those forces are left to play catch-up and clean-up. Arriving after the fact, is not a sustainable plan for anyone. That much has been proven by the recent attempted insurrection at the US Capitol on January 6, 2021, as well as by the white supremacist terrorist actions that have ensued all across the country. The endless race, drug, land, oil and natural resource wars around the world make the threat even more palpable. A few days ago, the Supreme Court of the United States overturned Roe v. Wade. Now, the right of every person with a womb to choose whether birthing a child is right for them, is no longer a personal decision but obligatory in many states. All of these ongoing threats, make the fight for democracy even more urgent.

The 2022 Global Forum was composed of elite scholars and political leaders. Out of 120 people I counted seven other students and myself as the only community member and reason the forum was organized in the first place. Why were we so few? Wasn’t the forum created for the purpose of getting ideas and starting to strategize and engage with students and the community, too? The fact that many others noticed this problem is telling.

Listening to panelists theorize about how higher education can engage students and the community in the work of democracy, was not really a practice in democracy. Panels were mostly composed by elite scholars, public officials, and highly knowledgeable heads of universities. Two panelists out of 25 were students. On the second half day, I had the chance to ask a question of the distinguished panel. To draw attention to the lack of students and community members at the table, I slowly and deliberately walked down the lecture hall steps toward the front. I smiled cheekily and before reaching the bottom of the steps I said, “Let me just walk a little closer to the table.” I positioned myself next to the panelists. My voice and hands trembled at the idea that I, a one-time undocumented immigrant from Mexico, could dare challenge these people of the establishment to think further outside their long held or self-imposed boxes.

My central question had to do with tradition. Knowledge and scholar-hood should not be an elite privilege. We all have valuable knowledge, skills, experience, information, and insights to share with the world. Even as children. I challenged the panelists and everyone in the room to think about the traditions in their own institutions. If we are to truly dismantle the systems that are not working, we must look at the traditions that led us to this point. Who has been traditionally excluded from your school? What tradition would you break, re-make or re-imagine?

Tackling those questions could take up a whole week, and there was no time to receive a satisfactory answer by mid-day. There were many people missing from the table. Too many unanswered questions remained and even confusing deflections or off-topic responses. It’s clear that books, data and armchair research will only lead us to so many answers. If universities are truly interested in developing fresh ideas and approaches, they would do well to ask those of us living the decline. I recommend they seek out ideas from those of us living just half a mile (in my case) from the proverbial Ivory Tower in East Side America.

This conversation about what universities can do to democratize the educational systems of the world, will start too late if we wait until adulthood. By then, too many kids will have been lost to fascist ideologues, propaganda, police brutality, fake news, tyranny, and oppression. Universities can do a lot to democratize the educational systems by humanizing their methods to include students of all vulnerable communities and scholars from all walks of life. But they must start early in order to make a dent in the world-wide problem of our dying democracy.

If the goal is to commit to the Democratic process, we need to flip the approach of universities on its head. The political leaders and the policy makers are the curious learners. The people are the learned scholars. Infusing a curriculum of democracy and social justice needs to start early. From the viewpoint of a non-traditional student and a mother, there are countless negative forces out to get my children. And the intervention that will create civically responsible, engaged citizens needs to be given a head start. We cannot afford to keep playing catch-up or clean-up any longer.