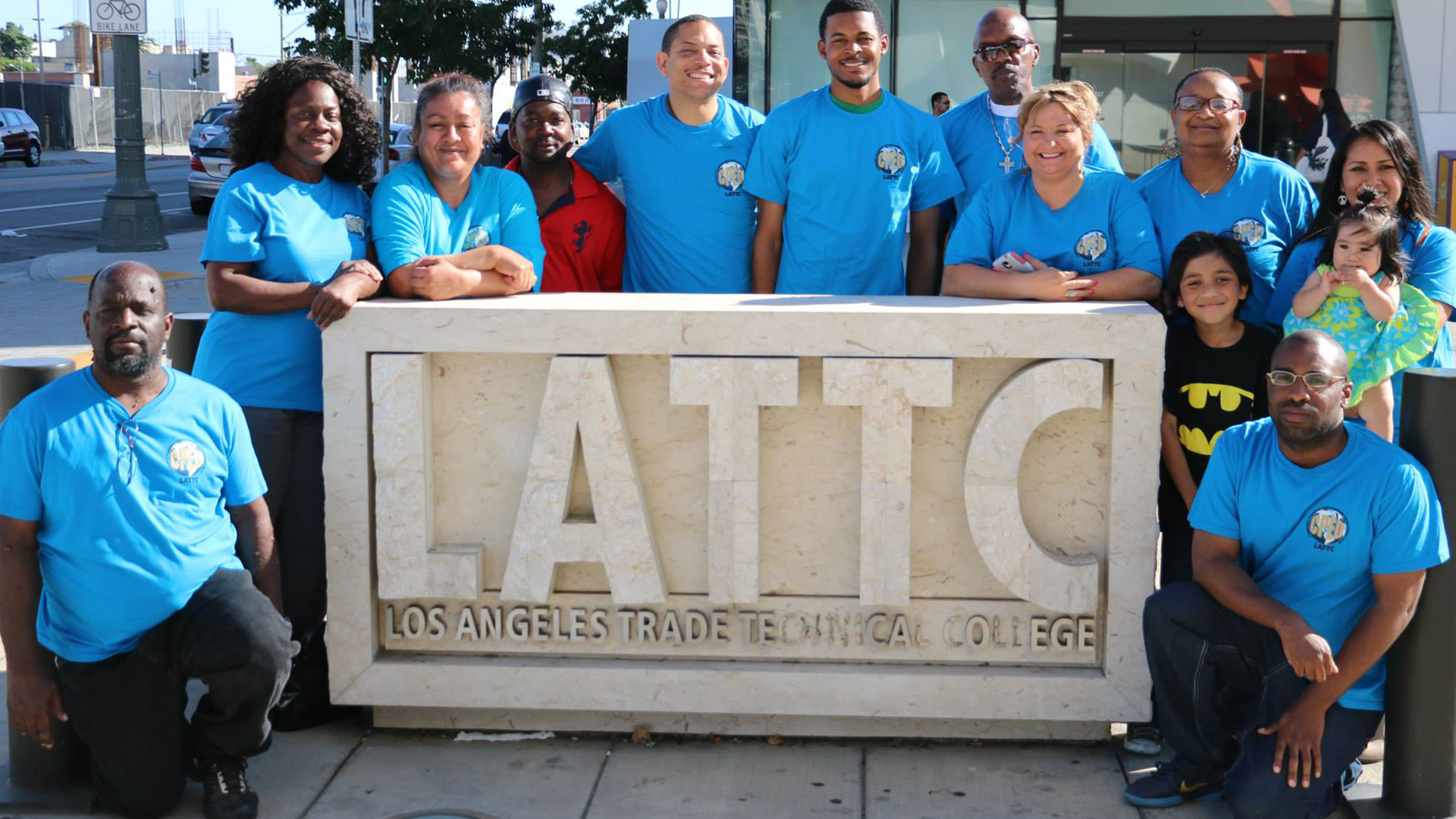 A new partnership between the California Youth Leadership Corps (CYLC) and the Conrad N. Hilton Foundation will create “learn and earn” career pathways at two Los Angeles area community colleges within rapidly expanding economic sectors: public health and clean energy. “The new CYLC initiative comes at a critical moment as the City of Los Angeles seeks to recover from the economic and public health devastation caused by the ongoing Covid-19 pandemic,” said Rosa García, Executive Director of CYLC. “It is estimated that 42 percent of job losses within the low-wage sector, which disproportionately employ youth from communities of color, will be permanent. We are thrilled to be working with the Hilton Foundation to connect young people to the growing sectors of our economy, like public and community health and clean energy.”

Today, the California Youth Leadership Corps (CYLC) and the Conrad N. Hilton Foundation announced a new partnership to develop and launch two new community college career pathway programs for youth with low incomes in Los Angeles. The $1 million initiative aims to increase access to good jobs for young people and people of color in growing sectors of the economy – public health and clean energy – through the creation of “learn and earn” career pathway programs.

Under this Hilton Foundation grant, the CYLC-LA program will collaborate with selected community colleges in the Los Angeles Community College District, the Emerald Cities Collaborative, and nonprofit organizations to recruit, enroll, and train 160 young people in career pathway programs in two rapidly expanding sectors: public and community health and clean energy planning and development. These career pathway programs will provide young people with postsecondary credentials and state-subsidized internships at local nonprofit organizations, where students will earn at least $15 per hour and do meaningful community-based work. Program participants will also receive critical academic and social-emotional supports, leadership development opportunities, and mentoring to help them succeed.

“The new CYLC initiative comes at a critical moment as the City of Los Angeles seeks to recover from the economic and public health devastation caused by the ongoing Covid-19 pandemic,” said Rosa García, Executive Director of CYLC. “It is estimated that 42 percent of job losses within the low-wage sector, which disproportionately employ youth from communities of color, will be permanent. We are thrilled to be working with the Hilton Foundation to connect young people to the growing sectors of our economy, like public and community health and clean energy.”

Through these paid, experiential learning opportunities, participants will increase their civic engagement, and expand their leadership development skills. Through pre- and post-program surveys, policymakers will gain a better understanding of issues facing youth with low incomes and communities of color — helping to create more inclusive workforce pathways in public and community health and clean energy planning and development and related fields.

The CYLC program will target the geographic locations of Downtown Los Angeles, South Los Angeles, East Los Angeles, and South East Los Angeles — areas where many young people with low incomes have faced signiﬁcant barriers to education and employment, but that also have strong community-based organizations interested and well-positioned to participate in the program. The CYLC program will have a specific focus on “opportunity youth” — those between the ages of 18-25 who face barriers to postsecondary education and employment due to poverty, lack of college access and opportunity, immigration status, homelessness and other circumstances.

“Even before the effects of the pandemic, over 145,000 of young people in Los Angeles were disconnected,” said Elizabeth Cheung, Senior Program Officer of the Opportunity Youth Initiative at Conrad N. Hilton Foundation. “We’re proud to partner with the CA Leadership Corps and the state of California to ensure that young people throughout the county receive training for two important career pathways and the leadership skills and support they need to become leaders within their own communities.”

As part of the partnership, CYLC will also document its learnings over the two-year period and share best practices with other community colleges and stakeholders across the state who may be interested in replicating the model.  CYLC program staff will also conduct trainings and host convenings for students, faculty and program staﬀ from the participating sites over the course of the two years.

The California Youth Leadership Corps (CYLC) is a new statewide partnership between the California Labor and Workforce Development Agency, selected California community colleges, the Community Learning Partnership, local nonprofit organizations, the California Endowment, the Hilton Foundation and other philanthropy and community partners. CYCL is preparing a new generation of young people to become community organizers and change agents in their local communities.

Brenda Carrillo has worked as the coordinator at De Anza College for the California Youth Leadership Corp (CYLC) — a new statewide partnership between the California Labor and  Workforce Development Agency, California community colleges, and the Community Learning Partnership — since March, 2021. In that time, they have worked with the first cohort of CYLC students — who include youth of color, opportunity youth, and immigrant youth — throughout their program for the first year.

“I’m not that much older than the students, so it’s been a really great experience so far,” Brenda said. Prior to assuming their current position, Brenda studied at De Anza from 2013 to 2019. “For the first five years, I didn’t really feel that connected to anything,” they said, adding that they were also working two jobs at the time, in addition to school. “I was going through the motions as an undocumented person. I needed to be in school, but wasn’t sure how long I could be here, so I was barely going.”

Through their work with HEFAS (Higher Education for AB 540 Students) — which provides educational programs and free services for undocumented students — they became familiar with the Vasconcellos Institute for Democracy in Action (VIDA). They applied and were accepted to an internship at VIDA, where they worked for two years.

“Being part of that community got me interested in learning more about what other people face,” Brenda said, adding they hadn’t been comfortable, prior to working with VIDA and HEFAS, publicly stating their undocumented status. For the first time, Brenda said, they were surrounded by people who not only shared similar life experiences — but were curious about their perspectives. “Suddenly people were like, ‘tell us more,’” they said. “It made me want to be more involved.”

Their work in these spaces also taught them, for the first time, that community advocacy and activism could be a profession — not just something to do in your free time. “I knew I wanted to be a community organizer,” Brenda said. “But I thought I’d have to get some other job and do community organizing on the side.”

Still, when the CYLC coordinator position opened up at De Anza, two years after they had transferred, Brenda had to fight back against some familiar self-critical voices. “I was like, ‘you’re not qualified, you don’t even have a Bachelor’s degree,” Brenda said, after being hired for the position. Several months into the position, however, they realized how much the Leadership and Social Change Certificate program at De Anza had prepared them for the opportunity. “It helped me find my voice and to know my life experience qualifies me to do this,” Brenda said. “It helped me find the power in me that was already there.”

Now, they are excited to help others do the same. “I just needed people in my life helping me, and now I want to do the same for others,” Brenda said. They said they are thrilled by the progress several of their students have made.

“I appreciate Brenda’s deep commitment to advancing the CYLC-De Anza team’s work,” said Rosa García, Executive Director of the California Youth Leadership Corps. “As a young leader and organizer, they care deeply about the health and well-being of our students and about the critical issues facing marginalized communities. They truly are an inspiration to CYLC students who are preparing to become organizers and change agents in their local communities.”

Brenda, for instance, has lent support to a student who was formerly incarcerated and didn’t have much work experience prior to enrolling at De Anza. He was interested in joining the CYLC program after learning about it, Brenda said, but was overwhelmed and frustrated by much of the process. “Even the process of signing up for financial aid, it’s hard,” Brenda said. “Just the paperwork can be a lot for someone with a lot of trauma.”

Brenda suggested he visit their office hours, and talk with them about how they could help. They encouraged him to attend workshops on how to enroll and access financial aid services. And today, he credits them with his decision to enroll and stick with the program. “He told us he would have left if it weren’t for our workshops,” Brenda said. Less than a year into the program, the student has also already found a full-time community change career with Silicon Valley De-Bug on a project to improve the country’s criminal justice system.

“He saw what can happen when someone really cares to help out, when it’s not just performance,” Brenda said. The student is looking to give back now, too, Brenda said. “He’s already asked about becoming a mentor to other CYLC students.”